The RFID Multitool ChameleonMini is a powerful and portable RFID emulation and manipulation tool that can emulate RFID tags, read tokens and sniff the radio communication. The credit card-shaped housing and integrated battery make it suitable for mobile use. In addition, transmissions can be read out and all data can be conveniently processed on the computer. Using a freely available open-source application, the ChameleonMini can be conveniently configured via a graphical user interface. Otherwise, it can be connected to a smartphone via USB cable or, in part, via Bluetooth and can thus also be configured on the move. This makes it possible, for example, to read an access card in passing and emulate it directly with the ChameleonMini and thus open a (actually protected) door. The ChameleonMini hardware is capable of emulating various ISO 14443, NFC and ISO 15693 cards, as well as other types of RFID transponders operating at 13.56 MHz. The ChameleonMini hardware consists of a PCB antenna driven by power transistors on the board to generate a 13.56 MHz RFID field. They thus function as an active RFID reader. An integrated Li-Ion battery can be charged via USB and enables stand-alone operation. The core of the hardware is an Atmel ATXMega128A4U microcontroller. The AES and DES hardware engines in the microcontroller enable very fast calculation of the cryptographic algorithms. 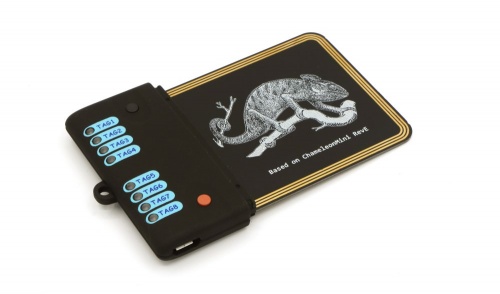 First you need to install the software in order to have a GUI to use the Chameleon Mini. The Version 1.3.0.5 can be downloaded here (http://www.icesql.se/download/ChameleonMiniGUI/publish.htm) Afterwards connect the ChameleonMini RevE Rebooted with an USB-Cable to your PC.

The first LED with the label "TAG1" now lights up red. Now switch to the "Settings" tab, a photo is displayed there and there is a green message with the designation "CONNECTED! In the lower area with the messages, "Success, found Chameleon Mini device on 'COMX' with Firmware RevE rebooted installed" appears like in the screenshot below. The ChameleonMini RevE Rebooted is now ready for use.