This is a description of how to set up and use a ConBee ZigBee USB Gateway USB stick to sniff out keys of ZigBee end point devices in smart home networks.

In order to complete these steps, it is recommended to be familiar with Wireshark.

Be sure to have permission to hack into the ZigBee network you want to analyse. Even better, set up your own network to generate some traffic. Minimal requirements: 1 bridge and 1 connected smart home device, such as an LED lamp, preferably with an additional app e.g. for your phone, to control/manage the smart home devices.

Plug ConBee into a USB Port.

Open ZShark. You will see this window: 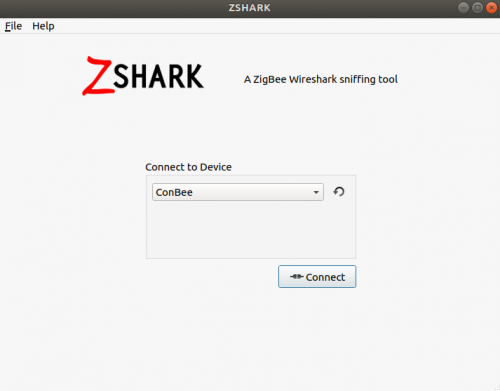 If the dialog tells you there is "No or wrong firmware found", and pressing the "Install Firmware" button doesn't prompt you to the next dialog, make sure no other USB devices are connected to your computer and try again.

If it still doesn't change, you can also install the firmware manually. For this open a terminal and change into the ZShark-folder (that is where you have installed the application) and run this command (as root):

Both paths are the absolute paths, and they may certainly differ from this solution. Make sure you look up the correct paths on your own system and use them accordingly.

If everything worked fine, you should see a dialogue like this 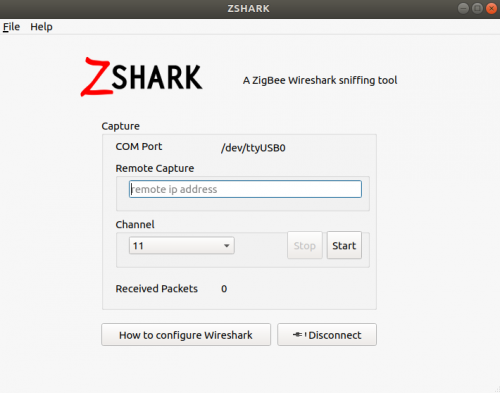 where the path in the COM port identifier shows you the sniffer was detected correctly.

The remote capture IP is to use if you decide to send the captured data to Wireshark on another machine. In my case this was not necessary, as I used Wireshark on the same device.

Channel 11 is the default ZigBee channel, so there you find your traffic unless you configured your network otherwise (in that case you obviously change it to the applicable channel).

You should see the number identified by "Received Packets" in the dialogue to increase immediately.

Choose the loopback interface. This is where ZShark sends packets by default.

It won't do no harm if you forget to apply the filter, though you will get packets displayed you won't be interested in. You can also apply it afterwards or add additional filters to easier find specific packets. 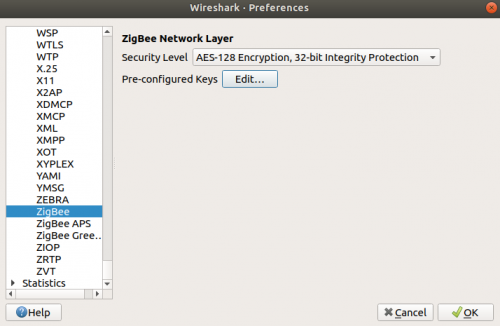 Leave the Security Level in its default value (AES-128 Encryption, 32-bit Integrity Protection). Choose Edit at "Pre-configured keys" and add the key of your bridge, which in most cases is

or, in this case using the Philips Hue Bridge, is

as these are mostly universal default keys so that communication in ZigBee networks can be established with lots of different devices from different vendors without further ado.

In both cases, choose the Byte Order "Normal".

Without the brigde key, you are still able to capture traffic, though you will not get access to additional information, or important insight into the payload respectively. For example, you would not be able to display the end-point device keys, which will be explained in the next step.

Start capturing the packets in Wireshark as well.

Now you will see traffic similar to this: 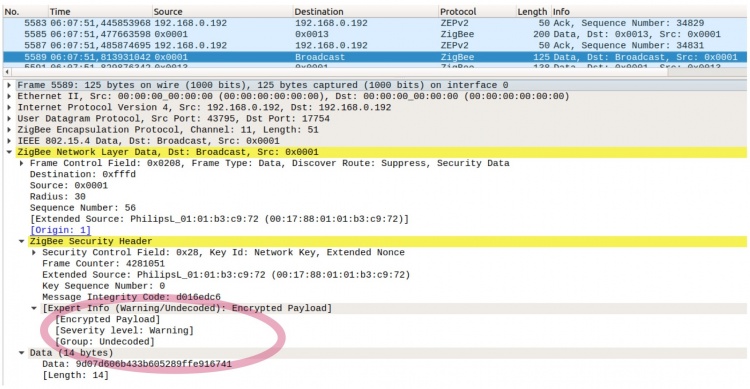 It shows there was data broadcasted, unfortunately without any further details. The circled output shows contained data is encrypted.

To get hold of an end-point device key in a ZigBee network, look out for specific packets. A device newly entering a network sends its key decrypted until it is established and ingested into the network by the bridge. If you have configured the bridge key correctly, you should see a new device advertising its symmetric key in packets which are tagged as "Device Announcement" in the information column of Wireshark (although there are other packets as well with visible key, this is the first one where this happens).

To simulate a device entering into a network, you have to reset it. With the light bulb, I simply disconnected it from its socket and re-attached it. Switching the light on and off won't help, it has to be taken off the electricity completely.

and add the key with Byte Order "Normal".

From this point on, you are able to see all information, as you can adequatly decrypt it.

This is the same packet as the first one in this section, only with added key. As you can see, the payload is now clearly visible, and it shows detailed information about the transported commands.