This documentary gives a brief introduction into elliptic curve cryptography

The scalar multiplication of a point on an elliptic curve over a finite field is equivalent to the exponentation of a number in a prime field, therefore the inversion is also called discrete logarithm.

TODO need to install math extension: https://www.mediawiki.org/wiki/Extension:Math/advancedSettings#Installing_texvc Failed to parse (syntax error): {\displaystyle y² = x³ + ax + b} The elliptic curve are all points in the x,y coordinates which fulfill the cubic curve equation, whereas a and b are called the characteristic of the curve. The curve needs to be smooth, which means that it will not contain any singularities such as a cusp or a self intersection,

This can be also described by the term:

Another characteristic we need to introduce is the point at infinity denoted by 0 (also known as ideal point), which can be thought as identity element infinitly raised on the y axis. Therefore our points on the elliptic curve over R² all fulfill this equation Failed to parse (syntax error): {\displaystyle \{(x,y)∈R2 | y2=x3+ax+b, 4a3+27b2≠0\} \cup \{0\}} and can be presented by: 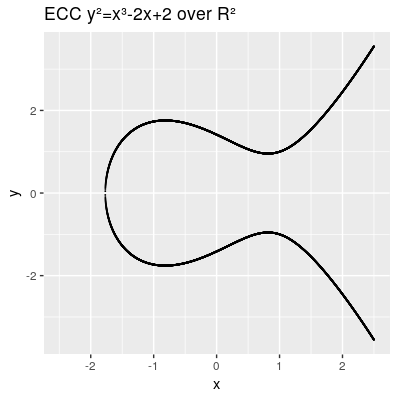 According to the group law all points support following operations:

The points further comply associative and commutative algebraic group laws and the handling of the neutral element: