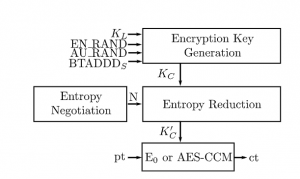 The goal of this protocol is to compute a session key starting from a long term shared secret At the top is Encryption Key Generation Function that takes as input the longterm secret a bunch of nonces and Bluetooth address of Slave and is computing Kc a key with 16 Bytes of entropy this key is not used as session key it is processed by an entropy reduction function that is used to modify the entropy to N bytes and this N number is computed from an entropy negotiation phase that is performed by alice and bob. This session key is used to encrypt and decrypt the packets using E0 stream cipher in case using legacy security mode or AES-CCM if both devices supporting Bluetooth secure connections.

Internalblue is a framework which can patch the firmware from the operating system. This attack is simulating an attacker using Internalblue, because the setup is easier, has a higher reliability, and it is cheaper than over the air.