This documentation is a survey about the security features of Bluetooth Classic and Bluetooth Low Energy.

Bluetooth Classic defines encryption and authentication during two different stages of the communication setup. The stages can be differed in Link-level and Service-level. Link-level enforced security features occur before the Bluetooth physical link is fully established. Service-level enforced security features occur after the physical link is already established and while the logical link gets established.Security mode one to the three were defined before Bluetooth version 2.1 came out. Bluetooth version 2.1 added the fourth security mode.

This mode is considered as non-secure because it doesn’t use authentication nor encryption. Security Mode 1 is only supported by today's Bluetooth devices to communicate with old devices that are not capable of the other security modes.

Security Mode 2 is called Service Level Enforced Security, access to services depends on the device. Trusted devices may use all services, untrusted devices only to a limited extent. There are three service security levels.

This security mode is a link level security mode and security procedures get initiated before the physical link is fully established. Authentication and Encryption is fully supported by security mode 3 connections. Furthermore, service discovery can only be performed with an authenticated device which encrypts its traffic.

Whether or not a link key is authenticated depends on the SSP association model used.

Secure Simple Pairing was introduced with Security Mode 4 at Bluetooth Version 2.1 and got improved in Version 4.1. The main goal of secure simple pairing is to simplify the pairing process for users. The secondary goal is to maintain or enhance the security of Bluetooth. SSP has two security goals, passive eavesdropping protection and man-in-the-middle protection. SSP provide several association models suited for all input/output capability combinations. Some of these association models are protected against passive and active man-in-the-middle (MITM) attacks during pairing by using ECDH public key cryptography.

Numeric comparison was designed for devices, where both can display a six-digit number and allow a user input to accept and deny the connection. During the Paring both devices show a six-digit code on their displays. The user can accept the parring if the displayed numbers are the same. The connection is secure against MITM attacks and eavesdropping, if the paring was done correctly.

This model can be used where one device a has a display that sows a six-digit number and the other device has a digit input. Device a show a code that must be entered into the keyboard of the other device to establish the connection. This model is also secure against MITM attacks and eavesdropping.

Out of Band (OOB)

The out of band model uses an additional wireless or wired technology like Near Field Communication (NFC) to exchange the needed cryptographic keys. This model’s security is only as secure as the out of band technology. Even though, this association model is associated to be secure against eavesdropping and MITM attacks.

The just works model is not secured against eavesdropping and MITM attacks. This model is designed for connection where both devices have no input or output capabilities.

With PIN / Legacy Pairing, the link keys are derived from a PIN entered by the user in one or both devices, depending on the configuration and device type. If the PIN is smaller than 16 bytes, the Bluetooth address of the initializing device is used for filling. After the key generation has been completed, the devices authenticate each other to ensure that both are using the same link key.This method only serves to mutually identify the devices and cannot prevent a man-in-the-middle attack. An attacker who knows the PIN can calculate the key from it.

Confidentiality of the data

The Bluetooth standard defines three encryption modes for data traffic, but only two of them actuals provide confidentiality. The modes are as follows:

Some peer-to-peer applications should use two authentication procedures in which each device is the challenger. In Figure is an example of a legacy authentication. The verifier has 3 input parameters, random input, bluetooth address and the link key the result is the SRES. The verifier sends the random message to the claimaint and does the same as the verifier and send back its SRES.

Secure Authentication follows the same principle but with two algorithms and several input parameters. Both devices act as a verifier and claimaint in the same sequence. Master Sends a random message to the Slave and vice verca. Both parties do their calculations and send each other their results. The input parameter BD_ADDRm is the Bluetooth Address from the Master, BD_ADDRs is the bluetooth Address from the Slave, btdk is a secret string, Link Key is the shared key, AU_RANDm is the random message from the Master, AU_RANDs is the random message from the Slave, SRESm is the result of the Master, SRESs is the result of the Slave. 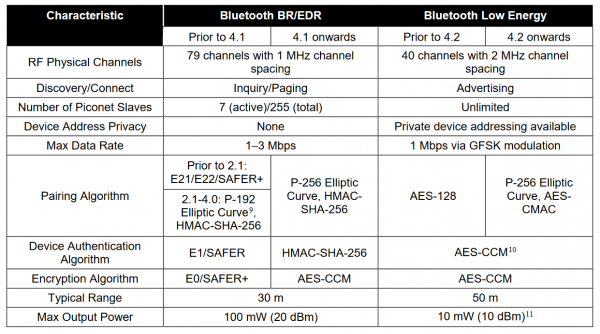