This is a tutorial on how to sniff Bluetooth Low Energy (BLE) packets using the Ubertooth One, 2.4 GHz wireless development platform device. This guide will detail the setup process and outline every step to capture a BLE connection. Furthermore, it will provide methods of bluetooth hacking, i.e cracking the encryption of a BLE connection and overwriting characteristics of a device. This tutorial is created in regard to the seminar paper: File:Pentesting in IoT Bluetooth Sniffing.pdf

Ubertooth One offers a well-documented GitHub-repository [1]. Follwowing its instructions, the device's tools require several components. To fulfill the demands, one has to install:

In contrast to the guide, the python-pyside component needs to be installed separately using the pip-installer:

In order to for Ubertooth tools to decode Bluetooth packets the Bluetooth baseband library (libbtbb) needs to be downloaded and installed:

Following that, the Ubertooth tools can be downloaded from the GitHub repository. They include host code, which enables sniffing Bluetooth packets. Additionally, they provide means to configure the Ubertooth device, including a simplified method for a firmware update.

The Wireshark Bluetooth Baseband (BTBB) and Basic Rate/Enhanced Data Rate (BR/EDR) plugins facilitate the analysis of Bluetooth baseband traffic that has been captured within the Wireshark GUI. The plugins need to be installed both separately from the libbtbb library. For the BTBB plugin the following commands have been used:

It is important to state that the MAKE_INSTALL_LIBDIR directory can vary depending on the OS used and the wireshark installation. However, it should be the directory of existing Wireshark plugins. The procedure needs to be repeated for the BR/EDR plugin.

This will display information about USB buses in the system and the devices connected to them:

Upon first operation of the Ubertooth One it is necessary to update its firmware. The tools, which were downloaded before, facilitate a simplified way to achieve this task. Change the directory to the firmware directory of Ubertooth and execute the following command:

If the update is successful, this output will be produced:

To verify the firmware-version enter the following command:

It is recommended to validate the functionality of the Ubertooth device via the spectrum analyzer, which is a tool to analyze the 2.4GHz band. Specifically, it provides a Graphical User Interface (GUI) tool named ubertooth-specan-ui, which visually monitors the frequencies. This command will start the spectrum analyzer:

Once successful, you can see the analyzer work its task through a powerful GUI:

In this case the figure shows several 802.11b networks in different channels, represented by green amplitudes. The white amplitudes depict beacons that are visible during scanning. The red lines adjust to different centers of frequency channels in the 2.4GHz radio band.

The BD_ADDR makes the allocation of sniffed Bluetooth packets possible. The Ubertooth One can start the LAP scan with this command:

In the output ch represents the channel used by the device referenced in the LAP value. The channel hopping is clearly comprehensible. Clkn indicates the master`s clock, while s references the signal strength and n states the value of noise. Following that the snr value represents the signal-to-noise ratio. This mode is especially helpful for undiscoverable devices, because it can calculate a BD_ADDR through the LAP in combination with the other parameters.

Alternatively, if the devices are discoverable, you can use the BLE scan of hcitools:

Among eventual other devices you should see the BLE devices you are testing, in this case the thermostat and the fitness tracker:

One of the most powerful tools the Ubertooth One provides is the Bluetooth Low Energy sniffing mode. Among other things, it can sniff and follow connections and even interfere with them. In the "follow" mode, Ubertooth listens on one of the three advertising channels. Once a BLE connection is established (on the advertising channel the device has been listenting to), Ubertooth will follow the hops along the data channels capturing the transmissions between the devices. Per default, Ubertooth can be used to follow any connection it observes randomly. Naturally, the device can be restricted to observe a specific device by providing the BD_ADDR of the device in question. The general syntax of the corresponding command for "follow" mode looks like:

Simply replace the BD_ADDR with the address you found out earlier:

This will produce a continuous output in the console.

Furthermore, it is possible to redirect the output into a file or a pipe. To achieve this, the syntax requires this generic command:

It is also possible to analyze the captured BLE packets in Wireshark. For this purpose create a pipe via:

Following that, a new interface needs to be added to Wireshark in order to use the just created pipe.

For this, the custom pipe /tmp/mypipe was added to the list of interfaces. 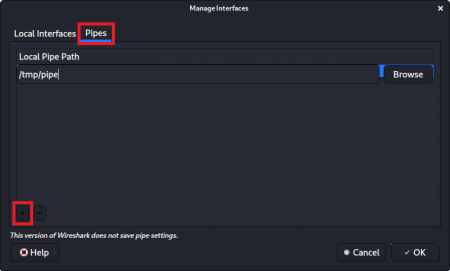 Now repeat the command from Step 5, but now with a redirected ouput to the pipe:

Select the custom interface you have just created in Wireshark to be able to analyze packtets with enhanced visibility and additional information.

After capturing the data it is possible to use additional third party tools in combination with Ubertooth to obtain critical information. In the following this is outlined through the utilization of the tools crackle and gatttool.

Crackle is a tool that attempts to decrypt BLE Encryption. Crackle is the right tool if you have captured a connection based on BLE Legacy Pairing. It can not decrypt LE Secure Connections based transmissions. Note that even if you are using Kali Linux the pre-installed version of crackle may be out of date without any possibility to update it through the respective repositories. It is recommended that you use the master branch from crackle GitHub-repository [2].

Now you can use the latest version of the tool by executing this command:

In this test, the captured connection revealed that the thermostat used no encryption and the fitness tracker used LE Secure Connections. In this regard, crackle was unsuccessful in both instances. When applied to the thermostat connection the output looked like this: 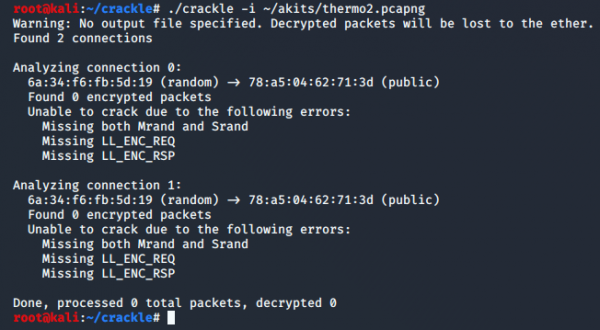 This is due to the fact that the thermostat connection has no encryption. Naturally, there is nothing to break. Note that you can receive a similar result if the connection uses some form of encryption but ubertooth fails to capture the respective packets. Ubertooth cannot track 100% of the transmissions. In the case of the fitness tracker the output clearly states that the device is running LE Secure Connections.

To show that crackle can indeed decrypt keys of Legacy Pairing connections we run the tool on the sample data provided here.

The utility gatttool can be used to manipulate characteristics attribute-values. In the following we change the temperature value of the thermostat.

Connect to your device using the following command:

This will give you a prompt. Type "connect" to innitiate pairing with the device:

Now you can use a variety of commands to send read/write requests to your connected device:

Find out the handles you need to address by analyzing the captured BLE connection.