This documentary gives a brief introduction into elliptic curve cryptography

Elliptic curve cryptography is a part of asymmetric cryptography, it is based on the mathematical hard problem to find a solution for the elliptic curve discrete logarithm. The calculations are performed on the algebraic structure of elliptic curves over finite fields, which means we compute points on a elliptic curve over finite field by applying the group operations double and add. The scalar multiplication of a point on an elliptic curve over a finite field is equivalent to the exponentation of a number in a prime field, therefore the inversion is also called discrete logarithm. First proposed application of elliptic curves in cryptography was random number generations, now ECC is widely used for key establishment and digital signature schemes. The main advantage of ECC is that it offers the same security level compared to RSA with shorter key lengths. Efficient implementations make ECC usable for constraint devices enabling security and privacy protection for emerging IoT systems.

Example usage of ECC in IoT:

The elliptic curve are all points in the

which fulfill the cubic curve equation, whereas

are called the characteristic of the curve. The curve needs to be smooth, which means that it will not contain any singularities such as a cusp or a self intersection, 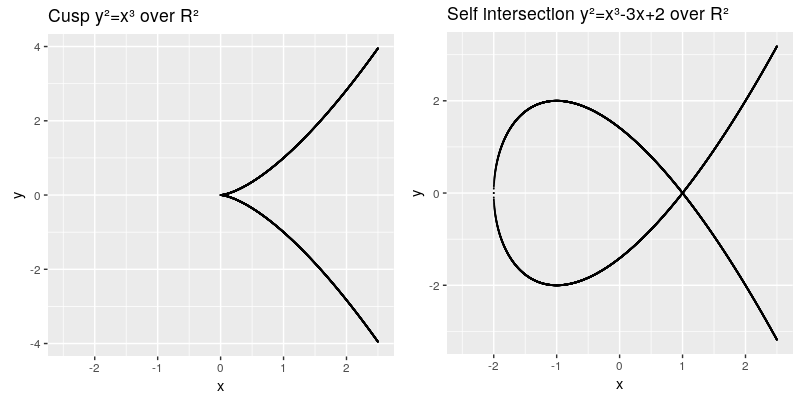 This can be also described by the term:

(also known as ideal point), which can be thought as identity element infinitly raised on the y axis. Therefore our points on the elliptic curve over R² all fulfill this equation

. A valid curve over rational numbers is shown in the next image.

In cryptography elliptic curves over finite fields are used. The number of rational points

of an elliptic curve over a finite field

can be computed with the Schoof-Elkies-Alkin algorithm, which is implemented in the PARI/GP library. The Hasse theorem gives an estimation of the number of points in the intervall:

The next figure shows a elliptic cuve

over a finite field, the prime field GF(199). On each y-axis are two points, the point and its inverse point, mapped into the positive space of the prime field. 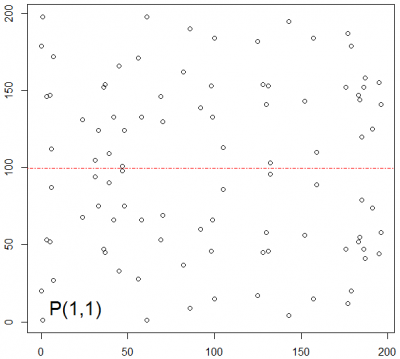 According to the group law all points support following operations:

Given the elliptic curve

, we can calculate the coordinates of the point

by adding this two points

Geometric derivation of the Point Addition by the Tangent Chord Law 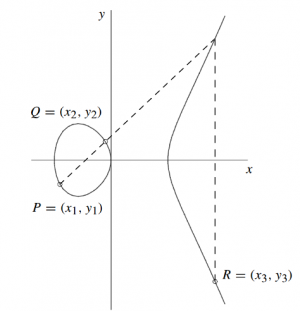 In the geometric derivation a line/chord is drawn through

, the result point R is the symmtric inversion on the

axis of the point at the 3rd intersection on the elliptic curve. 1. Calculation of the equation of the chord

we can find by insertion in the line equation:

This operation is also called the Point Addition in affine coordinates and the computational costs are 1 x inversion, 2 x multiplications and 1 x squaring. Interactive tool to visualize point addition.

Given the elliptic curve

and the special case

is achieved by doubling the point

Geometric derivation of the Point Doubling by the Tangent Chord Law

For the doubling a tangent is drawn at point

. At the intersection with the elliptic curve again the inversion on the

is taken to achieve the result point 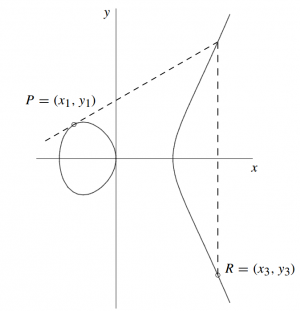 1. The tangent in point

has the equation of

. The slope of the tangent

is calculated by the differential function of

in the equation of the tangent

2. The y-coordinate of the point of the second intersection with the elliptic curve

to get the inverse point on the y axis.

is achieved by inserting

This operation is also called the Point Doubling in affine coordinates and the computational costs are 1 x inversion, 2 x multiplications and 2 x squarings.

Given a curve E

we examine the basic operations on the elliptic curve:

holds and this curve can be used for EC operations.

All by point P(6,1) generated 23 points satisfy the equation of the elliptic curve. Notice that each x value has two y values.

The points P(6,1) and J(10,10) are added with calculations in the finite field using the modular operation each time.

The addition of point P and J to get the result point R is visualized in the next figure. 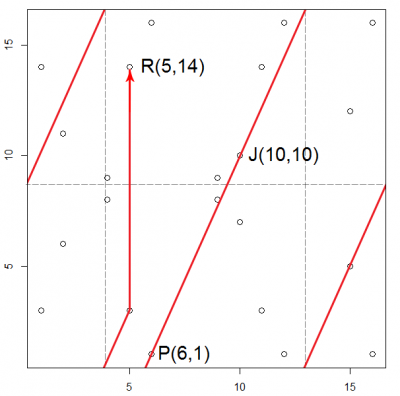 Algebraic group properties of the points

The points further comply associative and commutative algebraic group laws and the handling of the neutral element:

The inverse point of a point P(x,y) is therefore P(x,-y).

Is the mainly used operation on elliptic curves in cryptography, it adds

of the elliptic curve over a finite field e.g. prime field

The domain parameters for ECC schemes are described in the form

The generation of safe elliptic curves is an effort, hence it is recommended to use standardized known curves. First curves have been standardized in the ANSI X9.62 standard by the American National Standards Institute(ANSI) in 1999 [5], these have been extended or replaced by ANSI X9.63 in 2001[6] and ANSI FRP256V1 in 2011. The National Institute of Standard and Technology (NIST) defined their own curves in the NIST FIPS 186-2 in 2000[7]. In the same year the Certicom published the widely-used Certicom SEC2 curves [8] which have been continously updated in version 2 [9]. In 2005 NIST published the NSA Suite B[10] and the Federal Office for Information Security in Germany proposed their own randomly generated curves in the same year[11].

over a prime field 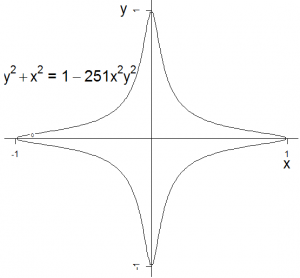 to calculate a common shared secret over an insecure channel. Assuming Alice and Bob like to establish a common shard secret for communication, both need to generate a keypair. A keypair consists of a private/secret key

and a public key

. For the private key

a integer less than

is randomly selected, then both need to calculate their public key with

, so that Alice has a pair of

. She sends her public key

to Bob and he sends back his public key

. Now both are able to calculate the shared secret, Alice computes