This documentation is about the Bash Bunny from Hak5. This device is an multi-purpose USB Attack platform that combines a Rubberducky and a Debian based micro computer to perform a wide range of attacks.

The Bash bunny has 3 Switch positions to switch between Arming mode and the two Attacks Payloads. The most left position sets the Bashbunny in arming mode, as shown in the figure. If the device is in this mode, its filesystem will be accessible and the user can edit the Payloads as well as the config.txt.

The filesystem is as shown below. Where config.txt is used to set the global configuration for all payloads like the language with the DUCKY_LANG EN. The payload.txt files contain the executed ducky script and bunny script commands for their corresponding switch position.

Commands like these can be added by downloading extensions from the Basbunny git repository. The downloaded extension then get inserted into the payload/library/extensions folder. Some basic extensions codes come preinstalled.

Is a keystroke injection shortcut to start programs. This command works on every operating system.

This command exports system variables like the Hostname or the IP address.

Searches through the /tools/ folder if the requited tool is existent. If the tool is not detectable the payload gets stopped and the LED goes into fail state.

The Bash Bunny can be used as many attack modes simultaneously, like an USB Rubber Ducky, LAN adapter, or storage device.

Opens an serial console interface. This interface can be used to access the Bash Bunny and configure it or to perform an attack with it.

Ethernet Control Model (ECM) is an driver model for USB Ethernet adapter that work on Linux, Android and MAC

Remote Network Driver Interface Specification (RNDIS) is the proprietary counterpart devolved by Microsoft and work only on Windows 7 and newer machines.

This Ethernet attack modes combines both by first trying to deploy an ECM Ethernet and if it is not successful changing to RNDIS.

The Storage attack mode let the Bash Bunny act as an USB Mass Storage (UMS). This method is manly used to transfer data to the victim device, like an image for an background change prank.

The attack mode arguments allow the user to set the serial number and manufacturer number that get shown at the victims device to raise less suspicion.

This values the vendor and product id to the prefered value.

The bash bunny owns a RGB led to indicate the current status of the payload script. The status can be set via the LED <Colors> <Pattern> or the LED <Predefined State> command.

The Quack quack command is either used to execute as single Ducky Script command or an Ducky Script that is contained on a different file in the bash bunnies file system.

There are three main ways to gain access to the Bash Bunny:

The Serial Console Interface can be used when the Bash Bunny is in attack mode. It is independent from the operating system but the ways are different.

Get the comport by entering

Extend the "Ports (COM & LPT) line and search for the "USB Serial Device(COM..)"

Open Putty and go to the Serial TAB and enter the following parameters: 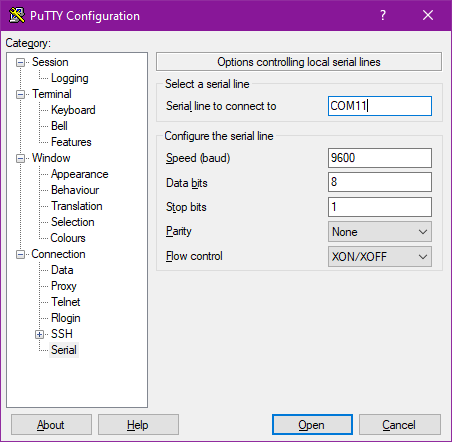 1. When using Linux it is preffered to use the package screen install it with

2. Search for the device with

3. Connect with the command

Set the bash bunny in attack mode (Switch at the nearest position to the USB connector) and plug it in. Enter the device and follow the path BashBunny/payloads/switch1 (switch 2 can be used as well)and edit the payload.txt file Windows Change the third line to

MAC and Linux Change the third line to

The RNDIS_ETHERNET and ECM_ETHERNET are used to display the Bash Bunny as an USB Ethernet adapter. Windows uses for this adapters proprietary drivers so it is not compatible with the Ethernet Control Model (ECM).

Connect the Bash Bunny with your internet.

The deployed internet connection is for the preparation phase only. During the attack phase the Bash Bunny is able to deploy its own little network, which does not have an gateway to the internet. But the LAN can be used to connect the victim to an Server Message Block NAS server that runs on the Bash Bunny to copy data to the victim machine. The internet connection is mainly used for downloading Debian software repository.

Linux Hak5 published a shell script that guides you threw the process. It needs root privileges but only performs two iptables NAT entries. Due to the habits of the iptbales service all entries get deleted during an machine restart, if the are not saved with the iptables-persistent service. But the entered data gets saved in the script it self and connection can be rebuilt with one command.

Enter C to connect the Bash Bunny to the Internet