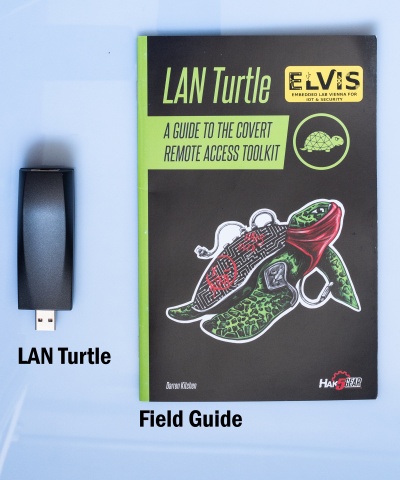 The LAN turtle is a tool for penetration testers and system administrators disguised as a simple USB Ethernet adapter. It provides possibilities to perform remote access, man-in-the-middle and information gathering attacks. These functions are provided by the turtle modules which are preinstalled on the LAN turtle. The modules are based on the OpenWRT platform which allow users to add customized modules. The turtle itself is covert by a generic USB to Ethernet adapter and can therefore be placed unnoticed in IT infrastructures.

Setting up the LAN Turtle

The LAN turtle comes packed with pre-installed tools. Furthermore it is possible to program your own or download them from the internet and configure them with the module manager as well.

AutoSSH is a service which provides persistent SSH connections. If an SSH session drops, it will be quickly re-established by AutoSSH. This service is typically used to provide a convenient and persistent reverse shell into the LAN Turtle on the standard SSH port 22 - though it may be configured with any standard SSH parameters to forward any arbitrary port.

Example: Per the defaults, the remote server will bind its local port 2222 back to the LAN Turtle port 22. In this scenario one may establish a persistent connection to their LAN Turtle from this reverse shell by first connecting to the public server, and then from there establishing an SSH connection to port 2222.

Cron is a job scheduler which can be used to start and stop modules at specific times or regular intervals using the 'start' and 'stop' commands.

DNSSpoof forges replies to arbitrary DNS address / pointer queries on the LAN. This is useful in bypassing hostname-based access controls, or in implementing a variety of man-in-the-middle attacks. For example, the IP address returned for a client lookup of the domain \"example.com\" can be replaced with that of the LAN Turtle itself, or a 3rd party server. In this scenario, the computer connected to the Internet through the LAN Turtle attempting to browse to this domain may be redirected to the spoofed IP.

With this tool you can create RSA keypairs and copy them to the public server. This is needed when AutoSSH is configured.

This module deploys an persistent shell to the Metasploit Framework of an other Machine.

This module uses nmap for discovering running devices and their port of the current LAN network.

OpenVPN enables remote access the LAN Turtle and optionally the network on which it resides. It allows to send the captured data to your operating network.

SSHFS (Secure SHell FileSystem) is a file system for Linux (and other operating systems with a FUSE implementation, such as Mac OS X or FreeBSD) capable of operating on files on a remote computer using just a secure shell login on the remote computer. On the local computer where the SSHFS is mounted, the implementation makes use of the FUSE (Filesystem in Userspace) kernel module. The practical effect of this is that the end user can seamlessly interact with remote files being securely served over SSH just as if they were local files on his/her computer. On the remote computer the SFTP subsystem of SSH is used.

URLSnarf allows you to capture which websites were accessed by the plugged in computer. URLSnarf only works with HTTP webpages which are hard to find today.

The LAN turtle can be deployed in various use cases, which can be divided into three categories:

Remote access attacks are used to gain access to a private network from a remote place in order to start further attacks from the inside network. This makes it a lot more easier because the attack itself does not have to bypass a router or firewall. All the attacker needs is the pre-configured LAN turtle inside the network and a remote server on the internet. To perform a remote access, the LAN turtle builds up a tunnel to the remote server so the firewall cannot capture the traffic. Finally the attacker can access the LAN turtle through the tunnel from the remote server. This attack can be performed with the modules AutoSSH or OpenVPN.

The last use case is information gathering. The aim of this attack is to receive information about the topology, the hosts and the protocols of an internal network in order to perform further attacks. This can be done with the modules like Nmap-Scan.

The following step-by-step instructions will outline how to configure the LAN turtle in order to perform the different types of attacks.

In this example consider an internal network which is secured by a firewall and a public server in the internet controlled by the attacker.

Step 2: Place the LAN turtle in the network

After configuring the spoofed hosts, place the LAN turtle on the victim computer by simply plugging the turtle into an USB port of the computer and the network cable into the LAN turtle.

As an example project we use the following modules:

This line start an nmap-scan every 15 minutes.