Ransomware is a type of malware that takes control over a victim‘s PC or Data, and blocking access to it, in an attempt to extort money. Conventionally the attacker demands that the ransom is paid in a hard to trace digital currency like Monero, Ethereum or Bitcoin. Modern day state of the art Ransomwares (which are mostly Cryptographic) use AES-256 to encrypt files and require payment for decryption. It is typically attained from deceptive email links or websites. Currently, there are two types of ransomwares: Cryptographic and Non-Cryptographic based.

Role of Cryptography in Ransomware

Malware / Ransomware use cryptography in order to hide its own code so that antivirus or security researchers cannot identify the actual code easily, communicate with its own command and control (C&C) Server and to encrypt the files on the victim machine.

A cryptographic system can have the following components:

Advanced Encryption Standard (AES), the most used encryption algorithm in ransomwares uses a symmetric key. More advanced CGRs use a combation of both Symmetric and Asymmetric Keys (CryptoLocker is known to use both a symmetric key and an asymmetric key RSA)

Cryptographic Ransomware (CGR) encrypts the files of the victim‘s device using „Strong Cryptographic“ Methods. These are methods that are considered highly resistant to cryptanalysis. The victim is informed of the encryption during an attack. A Timer is another component of the attack that is used to give the victim the feeling of urgency. There is no other easy way to decrypt the data than using the decryption key.
The main currencies used for paying the ransom are digital cryptocurrencies like Monero, Etherium or Bitcoin, because they are:

CGR is not just one ransomware, but a family of malware that behave in a similar way Most common CGRs are:

CryptoLocker comes is a plethora of different forms, one of which the Torrent Locker ransomware. The standard variant Uses the advanced encryption standard AES-128 cryptosystem to encrypt the data on the host machine. In the latter variant, Torrent Locker, on the other hand, encrypts users’s files with the most advanced encryption standard implementation AES-256-CBC. AES 128 uses 10 rounds while AES 256 uses 14 rounds. The higher the number of rounds, the more complex the encryption and is therefore the reason why Torrent Locker is more ”secure”.

NCRs unlike CGRs Do not use any encryption and are applications that are designed to restrict computer interaction by locking screen or modifying Master Boot Record (MBR). They are relatively weak compared to CGR. Examples of NCR include:

The main goal of screen-lockers is to restrict access to a victim’s system at the operating system level, meaning that the affected device or system cannot be used. The only thing that is displayed when booting the system, is typically a message demanding a ransom.

Extortionware is used by attackers to extort money from their victims, by gathering as much information as possible and stealing personal information and data that the victim wants to keep private. The attackers then usually threaten to release it, if the ransom is not paid. Mostly, none of the victim’s data is encrypted and none of their systems is blocked, but they have to pay if they do not want their private information to be leaked.

In order to gain access and infect a system, the attacker sends a huge amount of malicious spam emails to as many people as possible. Known example are phishing emails which target specific persons or companies. Via social engineering and deception tactics, victims are tricked into downloading malicious files or clicking on malicious links, which if opened infect the victim's computer.

Scareware is used to scare victim's into downloading malicious software. Example would be a pop-up in the victim's browser telling them that their computer might be infected and they need a specific software to remove the problem. Often real looking banners, logos and names of legitimate antimalware-solution companies are used to lure victims into downloading malicious software.

Ransomware as a Service (RaaS)

Ransomware as a Service is a growing business model on the dark web used by ransomware developers to distribute and sell their malware as service. Anybody, even without much technical knowledge, can execute ransomware attacks by just subscribing to this service. RaaS kits are rather easy to find on the dark web, where they are advertised like a normal product. These services may also offer a dashboard where the attacker has an overview of the progress, or even documentation with a step-by-step guide on how to use the ransomware. There are different types of RaaS revenue models, like a monthly subscription for a flat fee, a one-time license fee or a monthly fee but where a specific percentage of the ransomware profits is going to the RaaS-provider.

Tools for Reverse Engineering and WannaCry

First seen in 2017, WannaCry Ransomware has a series of elements. It enters victim in the form of a „dropper“ which contains an executable that encrypts and decrypts files, a copy of Tor Browser and the Encryption Keys (Kill Switch). It is timed like Jigsaw Ransomware and should the victim fails to pay on time, all files are deleted including the encryption key. The ransomware demands 0.025 bitcoin ransom but can be much more for corperations

Ghidra is a software reverse engineering (SRE) suite of tools developed by NSA's Research Directorate in support of the Cybersecurity mission. 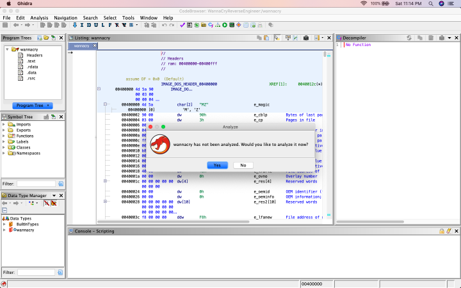 Securing Networks and Systems before an attack

A “Prevention is better than cure” approach includes:

Securing Networks and Systems during an attack

This section demonstrates how to create a simple CGR in python. Instead of using standard AES for encryption, this application uses a Fernet key due to its simplicity. Fernet keys use a combination of two smaller keys:

Main Secion of the Code