SQL Injection is a vulnerability, which can be found in applications, especially web applications. According to the List of OWASP Top 10 Web Application Security Risks Injections are still on top in 2020. SQL Injections - which are a specific type of Injections - are the most common way for attackers to either fetch sensitive data from databases or harm a system in its dependability or even causing non-availablity of the same. Such vulnerabilities become possible when input data is concatenated to SQL queries in conjuction with the absence of data sanitation.

This vulnerability can only arise when there is a lack of data sanitation. This implies the existence of data input interfaces, whether an input field or a HTTP header field. However when SQL is used in code at application layer it is often concatenated with input data from presentation layer. The combination of unsanitized input and SQL code concatenation with data input is very bad, because this leads to perfect SQL Injections. Input interfaces can be distinguished between:

All these entities contain data which is created on the client-side and also can be altered on the same. This is why the first step when any of this data arrives on the server is sanitation and validation. The latter can be partly done already on client-side. Thus, defining HTML attributes, which force user to use specific type or validating with JS, which can be used to apply regular expressions (Regex) on inputs, is essential.

When input data, therefore malicious SQL code, is directly concatenated to the SQL code in the application tier it is called Direct attack method. This way an authentication of a web-page can be bypassed.

In contrast to direct attack the indirect attack is when the SQL statement is terminated and arbitrary statements are attached to it. The end is then marked as a comment with using SQL specific commenting syntax, a double dash --.

Either way the malicious code is executed at the time it is received by the database.

Suppose the attacker gives admin as the username and ' or '1' = '1' as a password. That results in the following query that will be evaluated by the database:

The above SQL query is valid and returns all tuples from the Users relation. By adding the OR condition '1' = '1', the WHERE clause is always evaluated as true. The query then corresponds to:

Furthermore, several SQL statements can be executed simultaneously on many database servers by separating them with semicolons. The attacker can thus insert additional commands, for example, to delete a relation with a call.

The attacker enters the following in the password field:

This results in the following queries:

When the database server processes these two queries, it first returns all data records from the Users relation and then deletes or removes the entire Users table.

There are a number of SQL injection attacks that occur in different situations. Depending on the target of the attacker, the techniques can be used separately as well as together. These are for example:

The goal of the Tautologies attack is to find injectable parameters in the application to bypass authentication and initially extract data. The basic idea here is to always set the where clause in the SQL statement to true so that the condition is ignored. The most common tautology is or 1 = 1. By concatenating the operator or and 1 = 1, another condition is set that is always true, so that the result of the entire condition is true. An example of this can be found in the previous chapter.

In the case of a UNION query attack, the keyword 'UNION' is inserted in the input in order to retrieve data from other relations in the database. UNION enables the execution of several independent SQL queries in addition to the main instruction. The results of the further queries are appended to the results of the legitimate SQL query.

As a prerequisite, the attacker must have information about the database in order to extract data using UNION. These include e.g. Information about table names and their respective attributes, with which the further queries can be created and linked to the original statement. Furthermore, the individual queries must return the same number of columns and the data types of the attributes must be compatible between the individual queries. The attacker can use the ORDER BY clause to derive the number of columns from the results. The clause is added to the statement and the column index is increased until an error message occurs. The columns in a relation can be specified in the ORDER BY clause by an index, so you do not need to know the column names.

Example of a UNION query attack:

The attacker extends the legitimate instruction by entering the following in the password field:

This results in the following query:

The first statement returns zero. However, the second query is performed and returns the card number from the account number 123456.

Error messages provide the attacker with information on how he can continue his attack against the database. So it is usually a tool for attackers. With Blind SQl Injection, the attacker assumes that the error messages from the database are deactivated and still tries to executes the SQL injection.

It is assumed that a website retrieves its user data from the database using a UserId. The ID is transferred via the URL: To check whether an SQL injection is possible, the following condition (and 1 = 2) is added.

The actual SQL query that is executed is:

In order for this assertion to be confirmed, the attacker builds a condition that returns true. This would be, for example, and 1 = 1, since 1 = 1 is always correct:

The countermeasures for SQL injection, apart from the type of attack, are mainly the same. The root cause of SQL injections is the lack of input validation. Therefore, the simple solution to address these vulnerabilities is to use appropriate defensive coding. If you are working with user input that is initially used in SQL queries, it should be passed to the query via parameters and validated using defined regular expressions, also known as input whitelisting.

Damn Vulnerable Web App (DVWA) is a PHP/MySQL web application that is damn vulnerable. Its main goals are to be an aid for security professionals to test their skills and tools in a legal environment, help web developers better understand the processes of securing web applications and aid teachers/students to teach/learn web application security in a class room environment.

To Install the DvWA project follow the following page:

Burp Suite is a tool for performing penetration testing of web applications. With the Burp Suite, administrators can intercept and manipulate HTTP / HTTPS traffic to web applications before it is sent to the server. This enables security gaps in web applications to be discovered quickly and effectively. 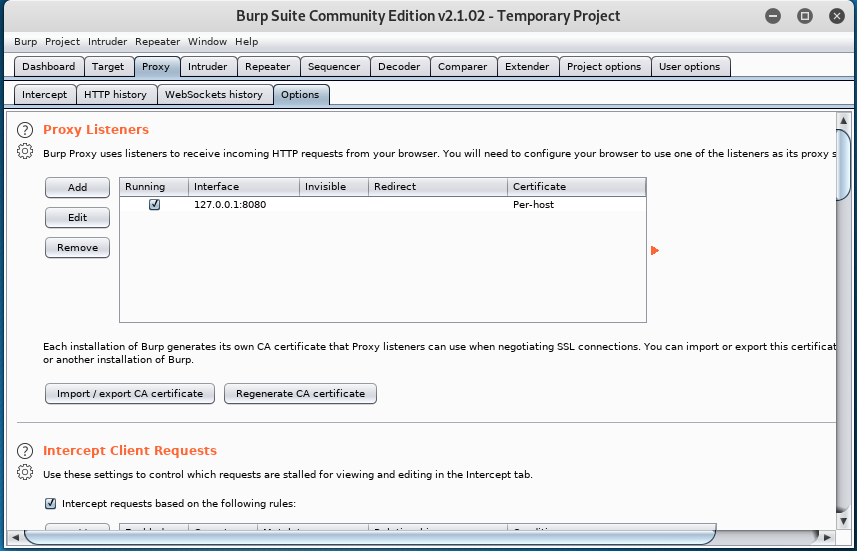 In the DVWA project move to "SQL Injection" and type in the following input as User ID:

This will deliver all users stored in the database as the condition is always true. 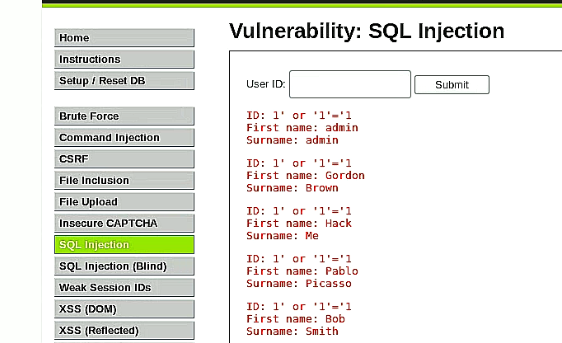 Afterwards when switching to burp suite tab "Proxy" -> History you will see that the request has been captured. Within the request the "PHPSESSID" will be included as part of the cookie.

With this sessionid it is possible to connect to database and get further information with the help of a third tool called "sqlmap". To get the databases within DBMS system use the following command: 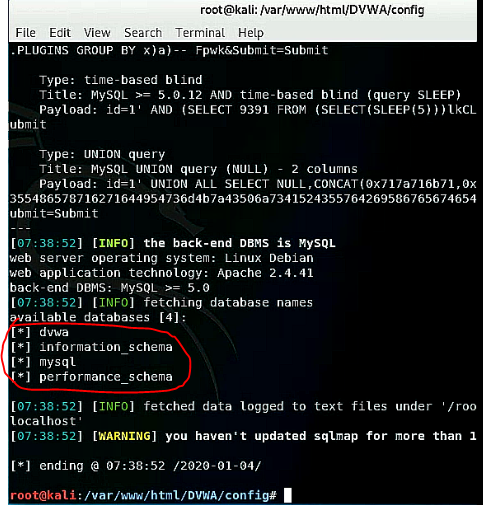 To retrieve the tables of a specific database for example dvwa database. Replace the "--dbs" option with the "--tables" and "-D" option and define the database. 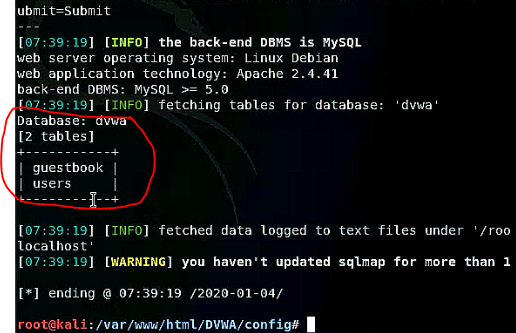 Furthermore, it is possible to see the database schema from database "dvwa" as well by executing the following command:

At the end to get to the sensitive data the attacker will execute the command: 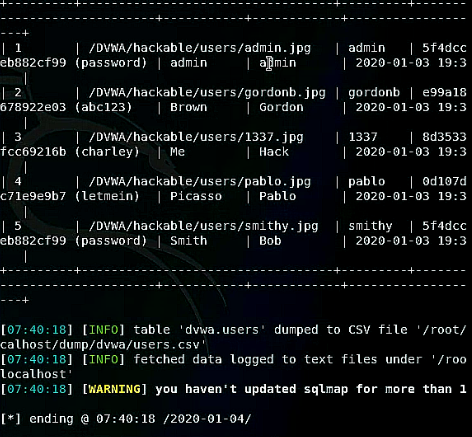