This documentation gives an introduction into the enumeration database ecosystem. 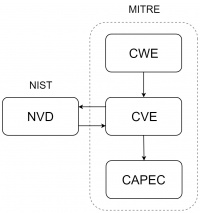 The Common Vulnerabilities and Exposures was published in September 1999 by MITRE. The initial list had 321 CVE entries. Today There are over 100.000 entries accessible for everyone. The CVE database was constructed to operate as trusted third party. Companies and individuals can send CVE entry requests which get checked by the CVE Numbering Authority. The CVE entry request than gets published on the CVE database. The CVE Entries are accessible for everyone.

A CVE entry consists out of:

Common Weakness Enumeration (CWE) is also hosted by MITRE since 2008 and holds a list of common weaknesses. The difference between weaknesses and vulnerabilities is that weaknesses cause vulnerabilities. Du to the fact that weaknesses are hardware and software independent there are less of them and they are easy to categorize. The CWE ID is only four digits long and doesn’t have a year portion but they reference to parent or child weaknesses because they are organized in a tree like structure.

The Common Attack Pattern Enumeration and Classification (CAPEC) is a database specialized on common attack patterns. CAPEC was released by MITRE in 2007 and gets hosted by the organization until today. The purpose of CAPEC is to understand how hackers exploit weaknesses in software. The benefits of CAPEC are cybersecurity training and attacking tools for penetration testing.