Stuxnet was the first cyber weapon to be developed and utilized in an act of strategic sabotage (attacking SCADA systems). Its origins are still unclear although there are theories about who might have been behind the attack. It is a very special piece of code targeting a very distinct setup. A total of seven vulnerabilities were found (four of them zero day attacks) for propagating, hiding, taking over and executing. Also, it used two different (stolen) signed certificates to make Windows believe its .dll files were legit. Unlike other worms or trojans it is quite huge and implements several programming languages. Interestingly it also has an “expiry date” where it would stop working. If not for coincidence it might never have been discovered.

Zero Day Attacks target vulnerabilities that have not yet been found and therefore also not been patched giving attackers huge advantages. Finding these vulnerabilities and developing working exploits costs a lot of time, money and human resources.

In April 2006 Iran announced they have successfully enriched uranium refusing to give in to international demands to close its nuclear program. From February to November 2007 about 3000 new centrifuges were installed in Natanz, a uranium enrichment plant. In the same year the US Congress released $400 million for covert operations against Iran´s nuclear program as Israel and other Arab Countries have continuously asked for help against Iran. In 2008 they again approached the US hoping for help with an airstrike on Natanz but the US leaders feared this would lead to a wide-range war and also, as Natanz was situated mostly underground, they pointed out that an airstrike would probably not be very effective.

Throughout 2009 the number of centrifuges at Natanz was increased to 8700 and on at least one occasion President Ahmadinejad proudly led a tour through the plant providing the world with videos and images of the control rooms and centrifuges.

Early 2010 the IAEA (International Atomic Energy Agency) inspectors that periodically visited Natanz, noticed a huge number of centrifuges being replaced. Later that year Stuxnet was discovered and with it the cause for all the failing centrifuges.

The first person to encounter what was later known as Stuxnet was Sergey Ulason at VirusBlokAda, Belarus. One of their customers in Iran contacted them because their computer kept crashing.

Ulason and his colleagues discovered several interesting factors about the malware they were presented with including the replication methods, the ability to hide in other processes and the usage of stolen certificates to legitimize to antivirus programs and Windows security.

They contacted Microsoft and RealTek to inform them about their discovery. As neither of the companies reacted, they finally posted their findings online but it took a blog article by Brian Krebs on KrebsOnSecurity.com to gain attention.

Symantec started their own research on Stuxnet as it was be then named. Also Ralph Langner, a German cybersecurity specialist and expert on industrial control systems, turned his attention on Stuxnet and finds clues that it targets a very special environment and only two Siemens PLC models.

In September 2010 Langner revealed most of the insights he had discovered in two online postings and commented them with the words: "Welcome to cyberwar".

Both evidence and motive indicate that the US and the Israeli were involved in the attack, as they both have the means financially and in terms of human resources. Additionally both countries maintain research facilities that could have been used to test the malware on the same setup as found in Natanz. Other sources mention China and Russia but no one has ever admitted anything. Even Iran denies that the closure of Natanz happened as a consequence of a cyber attack.

Stuxnet can spread in a variety of ways, as shown in the Figure "Stuxnet Propagation". Stuxnet spreads by infecting removable drives and copying itself over the network using a variety of means, including two Zero-Day exploits. Stuxnet also spreads by copying itself into Step 7 projects using a technique that causes Stuxnet to run automatically when the project is opened. This section introduces the distribution routines via the network, removable drive and the Step-7 projects. 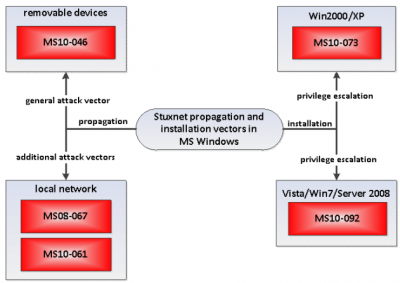 The real goal of Stuxnet are the computers that control the centrifuges. These are referred to as PLCs (Programmable Logic Controllers) and are special computers that are used to control electronic devices or systems, such as industrial systems. The PLCs are connected to computers which control and monitor these PLCs, and usually neither are connected to the Internet. Hence, Stuxnet needed another vector to reach these computers. One way was to propagate through USB flash drives. The different versions of Stuxnet use different ways for this: newer versions use a Windows-LNK vulnerability and older versions use a vulnerability in the autorun.inf file, both of which are examined in more detail below.

Stuxnet registers a code on an infected Windows computer that copies Stuxnet to the drive when a USB drive is inserted. Interestingly, an existing copy of Stuxnet on the external drive will be removed if that drive has already infected three computers. In addition to the Stuxnet DLL and a loader for this DLL, the malware creates four .lnk files on the removable drive. These are used to run the loader when a user is viewing the drive; four are needed to attack different versions of Windows.

An autorun.inf file is a file that causes Windows to automatically run a file on removable media when the media is inserted into the computer. Older versions of Stuxnet place an autorun.inf file on flash drives that are inserted into an infected computer. However, instead of using a separate file, it inserts the code for itself directly into the autorun file, along with valid commands to infect the computer with that code. Windows ignores the Stuxnet data portion because it ignores invalid commands in an autorun.inf file.

Propagation over the network

Stuxnet can use shared Windows folders to spread over a local network. It places a dropper file on any shares on remote computers and schedules a task to run. According to ESET, the task will be scheduled for the next day, while according to Symantec it should run two minutes after the file is shared.

Stuxnet copies itself, places the copy on remote computers through this vulnerability, and then executes the copy, thereby infecting the remote computers. In short: Stuxnet prints itself in two files in the system directory on each target computer, using zero-day EoP. It then runs the dropper file to infect the computer.

Via Step7 projects, Stuxnet infects industrial control projects from Siemens SIMATIC Step7 that are opened on an infected computer. This is done by modifying DLLs (Windows Dynamic Link Library; a library with commonly used objects: code, data and resources) and an .exe file in the WinCC Simatic Manager so that they can also execute Stuxnet code. Stuxnet inserts the additional code into Step7 project directories.