This description shows what the Throwing Star LAN Tap device is and how it can be used. Further information is given when the thorough explanation requires it.

To use this device for traffic sniffing, the following things are needed: 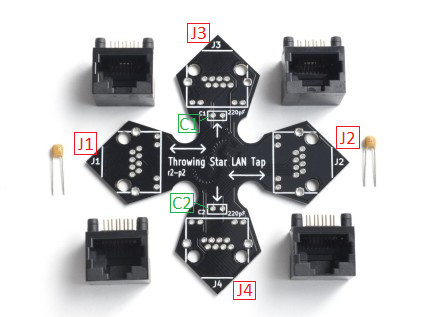 LAN Taps are integrated in the existing network and are used to monitor the network, because all traffic/packets coming into and going out of the network can be inspected using sniffing programs such as WireShark. The Throwing Star LAN Tap is a passive Ethernet tap that needs no power for working.

To assemble the Throwing Star LAN Tap Kit, the following steps must be taken:

Step 1: Installation of the device in the LAN network

The following figure shows how the LAN traffic sniffing device can be implemented into the existing LAN network. From here on out, it does not matter whether the Kit or Pro edition is used - both work the same. The sniffing device, in this example, is placed between the switch and the target computer. The traffic runs through the device (ports J1 and J2). The monitoring notebook is connected to the monitoring port J4 of the Throwing Star LAN Tap Pro. 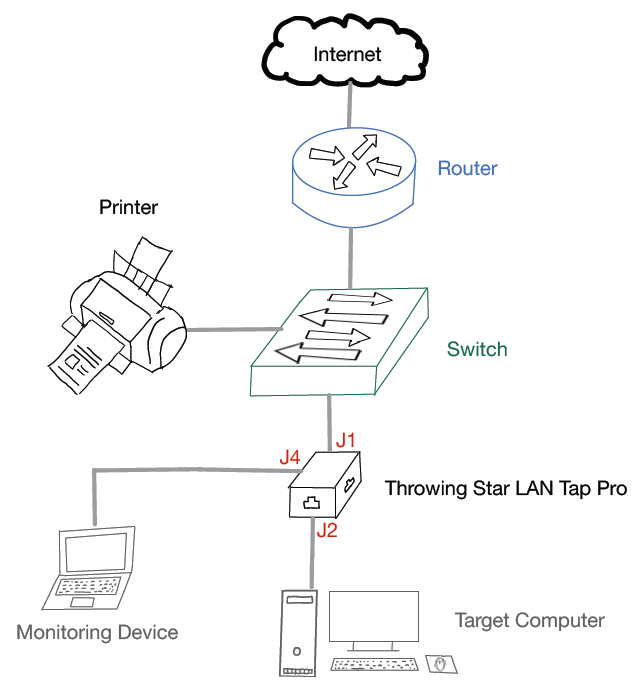 Network, where the Throwing Star LAN Tap is installed

For capturing various packets, several different kinds of programs and usages were performed on the target computer, which are listed in the following points:

Step 3: Analyse results in Wireshark on the monitoring device

Nowadays, every secure website uses HTTPS for communication over a computer network. It is also called HTTP over TLS, because the communication protocol is encrypted using TLS (Transport Layer Security). The packets that are captured in Wireshark need to be inspected properly and in detail, because packet analysis is more complex since most internet traffic is encrypted and applications commonly use encryption based on TLS as well. Only if the HTTP-protocol is used, the information can be sniffed easier. As an example, data/information that is shown in the Wireshark captures for TCP communication with HTTPS on top. These are one of the most important protocols for the mentioned use-cases described in Step 2.

Getting this basic metadata, which actually provides information about other data, with the Throwing Star LAN Tap is really powerful, because today, data is everything. Algorithms and systems can be used to extract insights and knowledge from this unstructured and structured data. Implementing the sniffing device (Throwing Star LAN Tap Kit or Pro edition) in corporate networks provides powerful information about companies, their whereabouts, knowledge, views and a lot more. Extracting useful information from the data is very important for data mining, which can give companies competitive advantages through statistics and predictions on basis of the given data.

The following figures show examples of which kind of information can be sniffed with the Throwing Star LAN Tap. The target computer has the IP-address 192.168.0.122. The screenshots are taken from the Wireshark capture of the monitoring device. The first example shows what kind of things are possible to see, if the HTTP-protocol is used. The login data can be read in cleartext, which is marked together with the host with a yellow rectangle.

The second packet capture example of Wireshark in the following figure shows that a document was printed on the printer, which is available in the Local Area Network (LAN). The document name can be seen in cleartext in the Wireshark packet capture, highlighted with a yellow rectangle.

Summary of the important aspects

All captured packets in Wireshark provide data like the listed points given in step 2 above for TCP with HTTPS on top. It is important to mention that the most data can be seen during connection/3-way-handshake or at the beginning of a session or transaction. After the initiation process and data starts flowing, only the payload can be seen, which does not provide more than encrypted payload packets with source and destination, length/size and the used protocol. As an example, for a network administrator it is possible to use data such as Source/Destination IP, Source/Destination MAC and the protocols to easily comprehend what the devices or users in the target network are up to and with whom they are communicating. It is important to remember that nowadays several protocols in use ensure security for the packets sent over a network. Therefore, traffic sniffing by using a device such as the Throwing Star LAN Tap becomes more difficult with Wireshark, but it is still possible to see loads of information and metadata. These can be used to inspect and learn a lot about the target network and are really powerful to a network administrator or for illegally obtained access to the network from a hacker. With a high number of IoT devices connected to a Local Area Network via Ethernet, the Throwing Star LAN Tap can be used very successfully by installing it in the right place in the network, for example between the switch and router. If all IoT devices are directly connected to the switch, all traffic that is sent to the router can be sniffed on the monitoring port, without any of the IoT devices knowing about this. For network administrators this can be a very powerful tool to find flaws and problems or inspect the network in detail.