Wireshark is one of the most famous network protocol analyzers. It is a powerful multi platform open source tool, that can analyze network traffic on all possible network interfaces, like Ethernet, Wi-Fi, Bluetooth, local Loopback and VMware Adapters and even USB. The Wireshark project was founded 1998 by Gerald Combs, under the name of 'Ethernal' and gets continuously further developed by volunteers, network professionals and enthusiasts around the globe. Version 1.0 was released in 2008. Before, only expensive and proprietary solutions were available. Today Wireshark provides a wide set of features including:

Therefore Wireshark is used to troubleshoot network problems, examine network security, test network applications and for educational purposes. It runs on all popular computing platforms, including Unix, Linux, and Windows. You can use it also to analysis imported packet capture savings from other non-graphical packet capture programs like tcpdump or tshark.

The application is free to download from the Wireshark website and is published under the GNU General Public License. A wizard leads trough the installation process. Npcap has to be installed to capture network traffic, additionally USBpcap can be installed, to capture USB traffic. Npcap is a packet sniffing driver copyrighted by the Nmap Project. 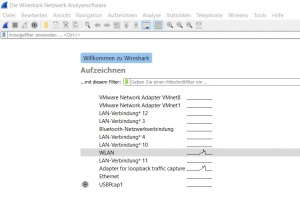 After starting the Wireshark application, it automatically scans for all available interfaces. In Figure 'Start screen' you can see the listed interfaces with a preview of the network traffic.

By clicking on 'Aufzeichnen' or 'Capture' above the interface list, the interface menu opens. The first tab shows the interfaces including their MAC Addresses, which helps identifying the right one. Also Pipes and remote interfaces can be configured. The second tab shows the output options. Here you can save the captures automatically in files, according to different rules. The third tab offers additional options for display and name resolution.

The capture process starts by double clicking a interface or select one and click on the blue fin icon in the menu bar. 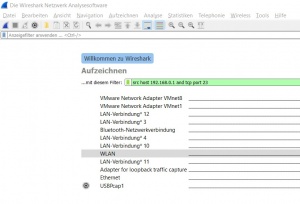 The Capture Filter is set before starting a packet capture and cannot be modified during the capture. It is more limited than the display filter and used to reduce the size of raw capture data. The filter can be entered in the text-field above the interfaces before the capturing is started. The Capture Filter has an own syntax described below. It only supports combinations of the listed primitives. An example is shown in figure 'Capture Filter'. The filter captures only packets which source IP address is 192.168.0.1 and the TCP port 23 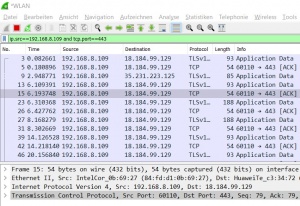 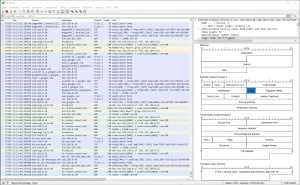 The Display Filter only filters the output on the screen. But can be modified during the capture process and also when analysing a saved capturing. So it's more flexible and can be adjusted to current needs. It's entered during a capturing in the above text field as shown in figure 'Display Filter'.

The Display Filter has a different syntax than the Capture Filter. Probably, because Wireshark is developed by many different developers, who add single features. The filter displays only packets which source IP address is 192.168.8.109 and the TCP port 443. As shown below, the Display Filter offers more possibilities to filter packets.

A more detailed list with possible filter expressions can be found in the Wireshark User Guide.

During the capture, a list of all incoming packets is displayed and you can start investigating traffic while it is in the process of capturing. In Figure 'Packet List', you see Wireshark in the middle of a capture. Three panes are worth looking at in the Wireshark window, thus are shown in figures 'Packet List' and 'Packet Details'. The top is for operation, such as starting/stoping capture process. The middle is the list of headers and the bottom pane shows the raw data, this includes a hexadecimal dump of each byte as well as an ASCII decode of those bytes on the right-hand side. Not all of the bytes can be decoded to a printable ASCII value, which is why you may see a lot of dots (.), that just indicates that there is a byte there but it can't be printed, see in Figure 'Packet Details'. The columns are described as follows:

Below the packet details, is the packet shown in Bytes. Mostly not very human friendly to read. To change that, the configuration and other tips are shown in the next paragraph.

Not so well known Features

Here are some configurations listed to make Wireshark easier and clearer to read.

Even tough, Wireshark is a powerful network analyzer, it also has its limits, which are listed below.

Comparison to Tcpdump and Tshark

Beside Wireshark with its graphical user interface, Tcpdump is a well known command line tool for netowrk traffic analyis. In this chapter, Tcpdump will be presented and compared to Wireshark, based on its performance and features. The focus of this list are the differences of these two tools. The similarities in traffic capturing are well known.

Tcpdump is a lightweight network traffic capturing tool working on the command line. It's available for free on most UNIX and Windows systems under the BSD license. It also uses the libcap library to capture packets and creates dumps with the raw packet data. The analysis is left to the user. To control the output and help analyzing it, Tcpdump provides a wide set of parameters. A full list is available at the Tcpdump manual.

It offers a command line interface, which makes it more lightweight. An important feature is, that Tcpdump can decrypt IPsec packets, if the needed secrets are provided. Wireshark can't decrypt any traffic. Tcpdump shows packets directly in the terminal window, without buffering them and by default. Wireshark always buffers packets, which can show them delayed. In terms of needed resources is Tcpdump much more undemanding. Wireshark needs ten times more memory and also much more energy than Tcpdump.

Wireshark offers a graphical user interface and colouring of different protocols. Which is clearly absent in Tcpdump. It's also very easy to apply different filters to captured traffic. Wireshark can save dumps in different files, like ring buffer, while Tcpdump can write one file only. As stated before, it can show current traffic statistics, which Tcpdump can't. Also Wireshark is 2-3% faster at capturing traffic. This can make a difference at high data rates. The biggest advantage of Wireshark is the flexibility in terms on analyzing and saving dumps. This can be changed in Wireshark after the capturing, while in Tcpdump everything has to be specified before you start capturing and can't be changed afterwards.

Tshark compared to Wireshark; we see that Wireshark also differs here on the topic of graphical interfaces. While tshark only presents you with a summary and the most important information, mostly from the packet headers, Wireshark contains a set of modules called dissectors. These dissectors are what make Wireshark so valuable.

This comparison shows that both tools have advantages and disadvantages. Wireshark is the more flexible and clearer tool. The GUI makes it easier to understand and very suitable for academic purposes. Tcpdump is more suitable for professional usage, as the dump needs to be clearly specified and it needs less resources. By the features it cannot be said, which tool is the better one. It depends on the use case and the environment to analyze. And also of the knowledge of the user, since Wireshark is more user friendly for academic purposes.